Russell Investments Group Ltd. raised its stake in shares of Denny’s Corp (NASDAQ:DENN) by 10.5% during the 3rd quarter, according to the company in its most recent Form 13F filing with the Securities & Exchange Commission. The fund owned 54,546 shares of the restaurant operator’s stock after purchasing an additional 5,164 shares during the period. Russell Investments Group Ltd. owned 0.09% of Denny’s worth $1,228,000 as of its most recent SEC filing.

DENN has been the subject of several research reports. MKM Partners began coverage on Denny’s in a research report on Thursday, September 26th. They issued a “neutral” rating and a $25.00 target price for the company. ValuEngine lowered shares of Denny’s from a “buy” rating to a “hold” rating in a report on Wednesday, October 2nd. Zacks Investment Research upgraded shares of Denny’s from a “hold” rating to a “buy” rating and set a $22.00 price objective for the company in a research note on Monday. TheStreet lowered shares of Denny’s from a “b-” rating to a “c+” rating in a research report on Wednesday, October 30th. Finally, Wedbush set a $25.00 price objective on Denny’s and gave the stock a “buy” rating in a research note on Friday, August 16th. One equities research analyst has rated the stock with a sell rating, three have assigned a hold rating and four have issued a buy rating to the company. The stock presently has an average rating of “Hold” and a consensus price target of $24.40.

Denny’s (NASDAQ:DENN) last posted its earnings results on Tuesday, October 29th. The restaurant operator reported $0.18 EPS for the quarter, topping analysts’ consensus estimates of $0.16 by $0.02. The firm had revenue of $124.30 million during the quarter, compared to analysts’ expectations of $126.62 million. Denny’s had a net margin of 18.80% and a negative return on equity of 34.15%. The business’s revenue for the quarter was down 21.3% compared to the same quarter last year. During the same quarter in the prior year, the business earned $0.17 earnings per share. Research analysts predict that Denny’s Corp will post 0.68 earnings per share for the current year.

Denny’s Corporation, through its subsidiary, Denny’s, Inc, owns and operates full-service restaurant chains under the Denny’s brand. As of December 26, 2018, it operated 1,709 franchised, licensed, and company restaurants, including 1,578 restaurants in the United States; and 131 in Canada, Puerto Rico, Mexico, New Zealand, the Philippines, Honduras, Costa Rica, the United Arab Emirates, Guam, the United Kingdom, El Salvador, and Guatemala.

See Also: What is net income? 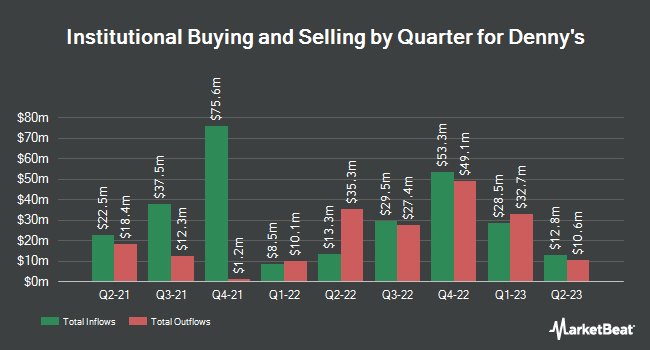 Receive News & Ratings for Denny’s Daily – Enter your email address below to receive a concise daily summary of the latest news and analysts’ ratings for Denny’s and related companies with MarketBeat.com’s FREE daily email newsletter.

Crack down on genomic surveillance

Association between gifts from pharmaceutical companies to French general practitioners and their drug prescribing patterns in 2016: retrospective study using the French Transparency in Healthcare and National Health Data System databases

Association between gifts from pharmaceutical companies to French general practitioners and their drug prescribing patterns in 2016: retrospective study using the French Transparency in Healthcare and National Health Data System databases