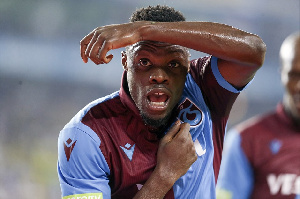 Football website GHANAsoccernet.com will bring to you how Ghanaian players abroad performed in their respective leagues across the globe every week

European football specialist Herbert Boakye Yiadom brings to you a comprehensive report on how Ghanaian players performed abroad over the weekend.

Caleb Ekuban made a return from his long injury lay off to play 25 minutes for Trabzonspor as they drew against Galatasaray in the Turkish Super League on Sunday.

The Black Stars striker was sidelined for two months after picking up an injury in training.

Jeffrey Schlupp scored his first league goal for Crystal Palace as they won 2-0 against Burnley on Saturday.

Kudus Mohammed scored his seventh goal of the season for Nordsjaelland in their 1-1 draw against Lyngby, He picked up two yellow cards and was sent off.

Jeffrey Schlupp scored for Crystal Palace in their 2-0 win over Burnley. Jordan Ayew lasted 81 minutes for Palace in the game.

In the Championship, Andre Ayew lasted the entire duration for Swansea City in their 2-1 defeat to Fulham.

Thomas Partey exhibited a top notch performance against Barcelona as Atletico lost by a lone goal.

Baba Iddrisu and Lumor featured for Mallorca in their 2-1 defeat to Betis.

Baba Rahman missed the game due to injury

In the Ligue 1, John Boye lasted the entire duration for FC Metz as they drew with Nimes

Enock Kwarteng warmed the bench in Bordeaux’s game against Reims

In the Ligue 2, Rabiu Mohammed was unused substitute for Paris FC in their defeat to Nancy.

In the Serie A, Kevin-Prince Boateng came off the bench to play 45 minutes for Fiorentina as they lost to Lecce by a lone goal

In the Serie B, Emmaunel Gyasi warmed the bench in Spezia’s game against Cosenza

Nuhu Kasim played the entire duration for Dusseldorf as they drew against Hoffenheim. Bernard Tekpetey played 59 minutes while Opoku Ampomah was unused substitute in the game.

Seth Paintsil was introduced into the game in the 79 minute for Admira in their 1-1 draw against Salzburg.

Majeed Ashimeru was unused substitute in the game for Salzburg

Godfred Donsah played 90 minutes for Cercle Brugge as they lost 2-1 to St.Leige

Nana Asare played the full throttle for Gent as they won by 2-0 against Kortrijk.

Eric Ocansey featured in the game for Kortrijk

Jonathan Osabutey lasted 78 minutes for Mouscron as they lost to Club Brugge by 1-0.

Joseph Paintsil came off the bench to play 30 minutes for Genk in their 2-1 defeat to St.Truiden.

In the Proximus League, Kamal Sowah played 87 minutes for Leuven in their 2-1 win over Lokeren. Ahmed Said played 58 minutes for Lokeren

Obeng Regan lasted the entire duration for Istra 1961 in their 2-1 defeat to D.Zagreb

Benjamin Tetteh saw 79 minutes of action Sparta Prague in their 1-0 win over Pribram.

Emmanuel Antwi was on the bench for Pribram

Lawrence Ofori was unused substitute in the game for Famalicao.

Edmund Addo featured for Senica as the drew against Z.Moravce

Benson Anang played the entire duration for Zilina as they drew against Slovan Brastislava.

Comments:
This article has no comments yet, be the first to comment