Blackstone Group LP (NYSE:BX) Vice Chairman Hamilton E. James sold 280,046 shares of the firm’s stock in a transaction on Tuesday, November 5th. The stock was sold at an average price of $51.73, for a total transaction of $14,486,779.58. The sale was disclosed in a filing with the Securities & Exchange Commission, which is available through this hyperlink.

Blackstone Group (NYSE:BX) last issued its earnings results on Wednesday, October 23rd. The asset manager reported $0.58 earnings per share (EPS) for the quarter, topping the consensus estimate of $0.53 by $0.05. The business had revenue of $1.74 billion during the quarter, compared to analysts’ expectations of $1.31 billion. Blackstone Group had a net margin of 27.05% and a return on equity of 7.61%. The business’s revenue for the quarter was down 9.9% compared to the same quarter last year. During the same period in the previous year, the company earned $0.63 earnings per share. As a group, equities research analysts forecast that Blackstone Group LP will post 2.28 EPS for the current fiscal year.

Featured Story: What is a good rate of return for a mutual fund? 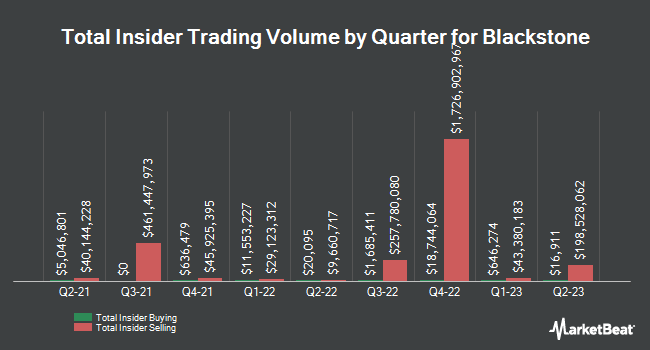