Individuals face many potential hardships when trying to access mobile technology. As discussed in previous chapters, these can range from limited access to electricity to low literacy to financial constraints or some combination of these and other factors.

Given this complexity, we wanted to understand who experiences which types of problems using mobile phones and the regularity with which they experience them. Additionally, we wanted to explore the differences among mobile phone owners, sharers and non-users, who were each analyzed separately in earlier chapters. To do this, we created four scales, each addressing a different type of issue that can affect people’s phone use: connectivity, financial, language and security.

Each scale is composed of between three and six questions related to that topic. On questions that measured the regularity of different problems, people were given a score of “1” if they “frequently” experienced that issue or if that issue prevented them from owning or sharing a phone and “0” if they did not frequently experience it. For example, individuals were identified as having a persistent language issue if they said information they want or need on the internet is frequently unavailable in their preferred language, among other questions. (For more on how other questions are coded as part of the scale, see Appendix B).

Although each scale is composed of three to six questions, no one was asked every question because phone owners, phone sharers and non-users were asked different questions. For example, only owners and sharers were asked whether information they sought online was regularly unavailable in their language, and only non-users were asked whether inability to read well was a reason they did not use a mobile phone. But all adults were asked at least one question included in each of the scales and thus are included in the following analyses (for more details, see Appendix B).

Connectivity hardship – Individuals are identified as having a connectivity hardship if they report difficulty using mobile phones because of poor service coverage or few places to charge a device (owners and sharers) or if lack of service prevents them from using a phone (non-users).

Language hardship – Phone owners and sharers have a language-related issue if they report content they want or need online is frequently not available in their preferred language. Non-users are identified as having language issues if they say they do not use mobile phones because they do not think there are apps or websites in their language or if they say they cannot read well enough to use a mobile phone.

Security hardship – This measure includes all adults who report being very concerned about their personal information being stolen. Among those who say they share a phone, this includes adults who report worry their phone could be stolen or because their phone was previously lost, broken or stolen. Non-users with security hardships are those who say they do not use a mobile device for fear it would be stolen or have concerns about the security of their information.

Security-related hardships are among the most common 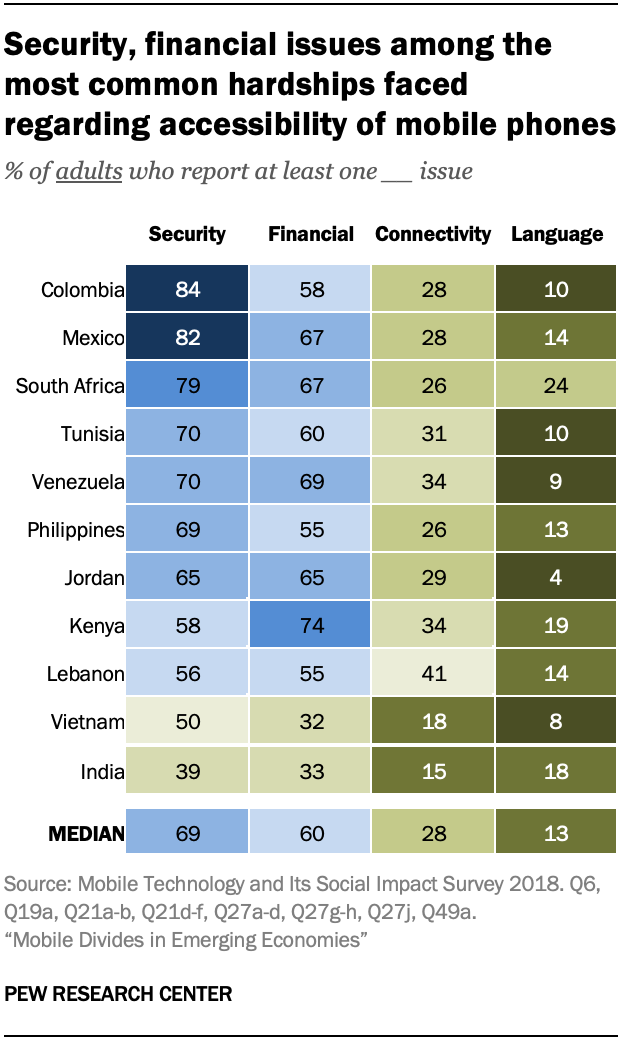 Security-related hardships are relatively common in the 11 emerging economies surveyed, with a median of 69% reporting at least one security hardship. Outside of India, half or more report facing at least one security-related hardship, meaning most individuals are concerned about the security of their information or the physical security of their device. These hardships are especially common in Colombia (84%), Mexico (82%) and South Africa (79%). These countries all rank at or above the median for robbery rates, according to a report from the United Nations Office on Drugs and Crime.

Across the 11 countries surveyed, fewer report experiencing a connectivity issue (median of 28%). In every country, fewer than half say they frequently have issues related to reliable service or charging their phone. Connectivity issues are most common in Lebanon, where about four-in-ten adults (41%) report connectivity difficulties.

In every country surveyed, only a minority report a language-related issue using their phones (median of 13%). The highest rate of language issues is found in South Africa, where about a quarter (24%) report a language issue. This may be due, in part, to the diversity of languages found in South Africa. As such, some individuals may perceive limited availability of content in their preferred language, even if they are able to read and understand content in other languages. 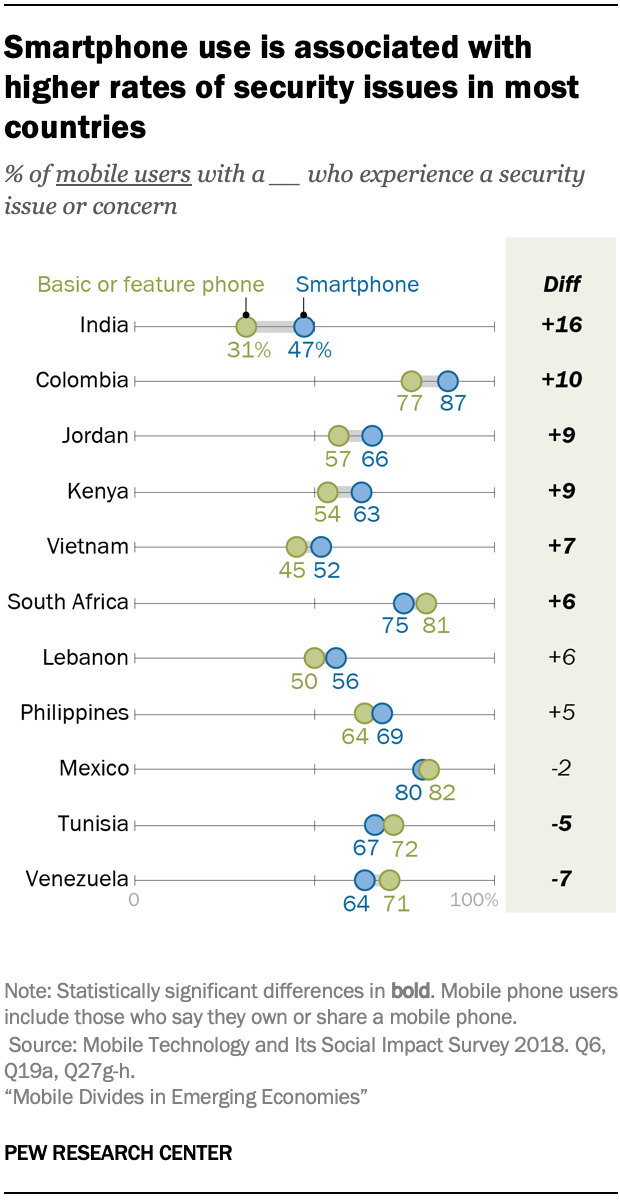 In five countries, those with more education are more likely to report concerns regarding the security of mobile phones and the information they may contain. In Kenya, 69% of individuals with more education report a security issue, compared with 54% of individuals with less education. But, in Tunisia and Venezuela, these patterns are reversed: Those with lower levels of education are more likely to experience a security-related issue.

You can’t really use your [smart]phone on public transit as it could be stolen. Man, 21, Tunisia 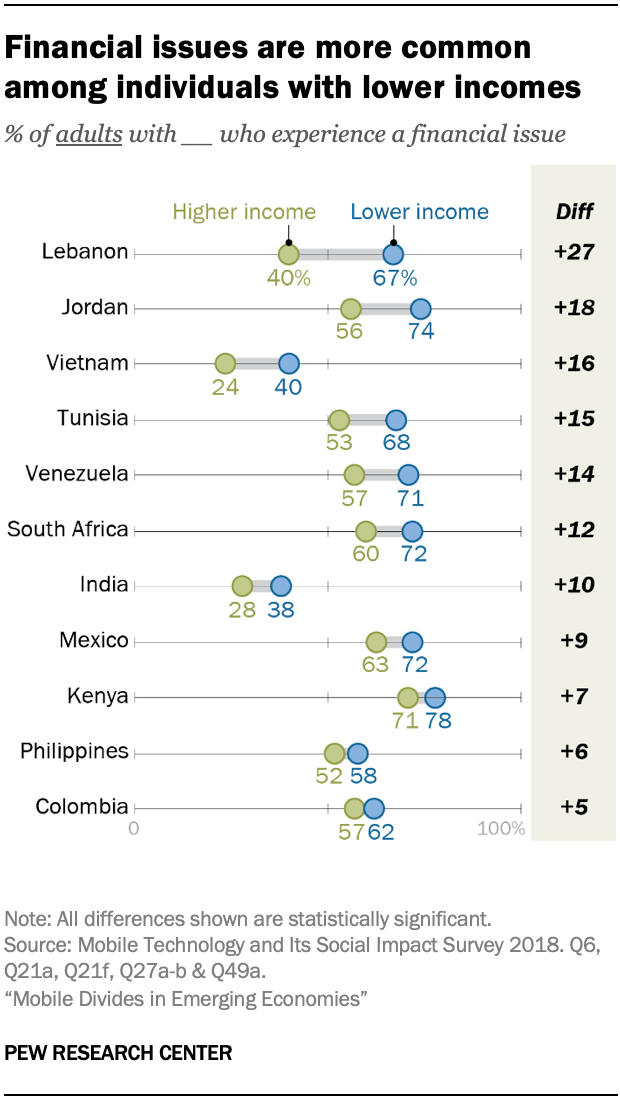 In most countries, younger adults (those ages 18 to 29) are more likely than older adults to report a financial issue. For example, while around half (49%) of South African adults ages 50 and older report financial issues, around three-quarters (77%) of those 18 to 29 say the same. 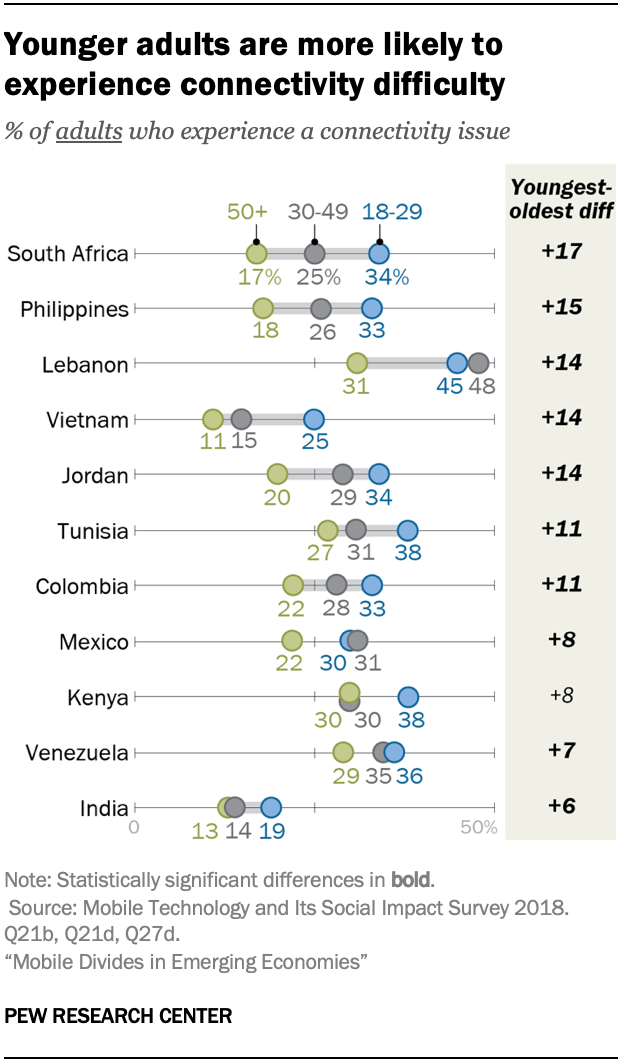 I have that behavior where I ask people if I can charge my [smart]phone for two seconds. Woman, 49, Kenya

Non-mobile phone users are more likely than phone sharers or owners to report having a language issue in many countries for which the analysis is possible. In Tunisia, for example, 57% of non-users report a language-related issue, compared with 8% of both mobile sharers and owners. 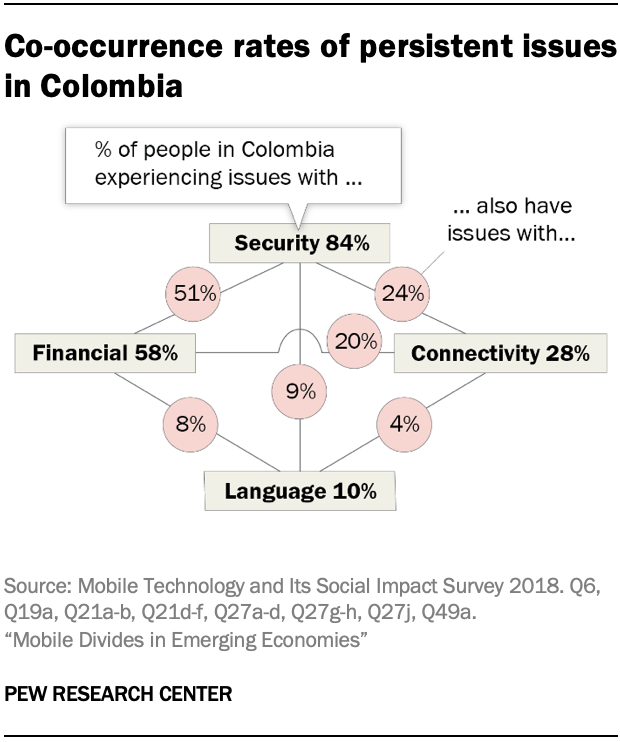 [You need an] additional budget because of the load and electricity, because you need to charge it. Before I paid for 100 but now it’s 200 already. Woman, 26, Philippines

Based on statistical analysis that controls for multiple factors concurrently, we find that individuals with higher incomes experience fewer total hardships, whereas smartphone users report experiencing a greater number of hardships. Adults ages 50 and older experience fewer issues than younger adults even after controlling for other demographic factors (for hierarchical linear regression results, see Appendix D).

Difficulties do not shape how people feel about mobile phones in society, but financial difficulties impact perceived personal benefits

Results of this survey suggest that, regardless of hardships associated with mobile phones, people tend to feel similarly about the benefits mobile phones bring to society. In most countries, these evaluations are quite positive. More than half in all countries but Venezuela say that mobile phones have been a good thing for society, ranging from 53% in Jordan 86% in Kenya.

If I pay [for my phone’s] internet, I will get money from there. I will be able to call people from outside and they will give me money. Man, 32, Kenya

Regardless of the type of hardship people face, those who face more challenges accessing mobile phones are still as likely as those facing fewer hardships to see positive societal benefits stemming from digital connectivity.

When asked about specific kinds of impacts mobile phones might have on various aspects of national life, evaluations are more mixed. But these attitudes are not generally colored by whether individuals have difficulties using their mobile phones due to any of the challenges they might have experienced – such as connectivity, financial, security and language. Rather, people who do not face hardships using their phones and those who do tend to feel similarly about how mobile phones impact their country’s economy, education and even children in the country.

Overall, people say mobile phones have been personally beneficial regardless of whether they have experienced hardship in accessing them. Aside from Venezuela, where only around half (49%) see personal benefits, in every other country surveyed, roughly three-quarters or more say they gain personally from mobile devices. When it comes to particular types of personal benefits, though, mobile users who face financial hardships are somewhat more likely to see mobile phones positively impacting them when it comes to obtaining news and information, earning a living, concentrating and getting things done, and communicating face-to face.