Barclays reported a net loss for the third quarter on Friday after being hit by $1.4 billion ($1.8 billion) worth of insurance claims. However, the lender’s investment banking unit saw profits rise.

The British lender posted £292 million in net loss attributable to shareholders for the three-month period ending Sept 30. Data from Reuters’ Eikon predicted a loss of a £19.2 million for the quarter. Barclays had posted a £1 billion net profit in the same period last year.

“Overall on a dollar basis the U.S. investment banks’ markets businesses were up roughly 6% as were we, so again we stayed in line with the U.S. banks. We did particularly well in the fixed income and the credit space, so it was a good quarter all things considered for us but we do look forward to a little more volatility in the markets down the road.”

Here are some key highlights for the quarter:

The lender made a £1.4 billion provision to settle mis-selling claims in the fallout of a payment protection insurance (PPI) scandal.

The PPI saga arose after British banks were found to have sold customers insurance they did not need over a number of years. The substantial payout for the third -quarter results from a spike on claims ahead of the August 29 deadline set by the Financial Conduct Authority (FCA), U.K.’s financial watchdog.

“I’d say we’re well over half of the claims that have come in, we have studied and that’s a pretty good data set. Given that number, we have been fairly conservative in the PPI provision that we took in the third quarter so my bet is I think if things come out as we expect, we have put PPI behind us in the third quarter and don’t expect to take another provision in the fourth quarter,” Staley said. 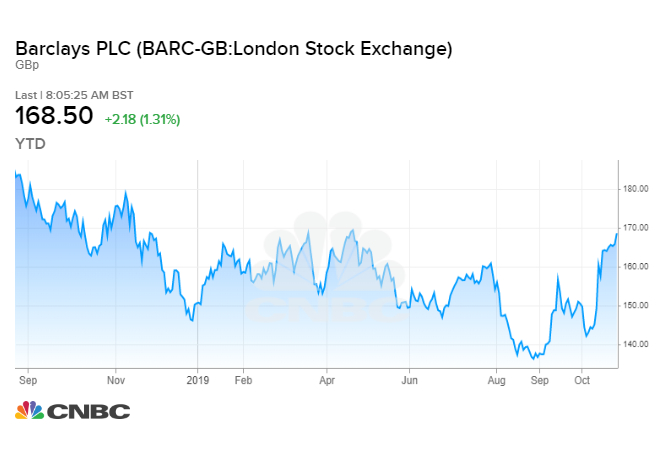 Meanwhile, Barclays saw profits in its corporate and investment bank jump by £609 million, vs. £431 million in the same period last year.

Shares of Barclays traded more than 1 percent higher in early morning trade and are up more than 10% year-to-date. However, uncertainty surrounding U.K.’s departure from the EU continues to weigh on the British lender. Barclays’ shares are down more than 10% since June 23, 2016 – the day U.K. voted to leave the EU.