A focus on sensational crimes such as shootings by and of police officers at the expense of the violence experienced daily by many at-risk communities. Short stories, or no coverage at all, of violent crimes that news managers deem not newsworthy.

The use of racist language in news reports.

In response to these and other criticisms of news media coverage of violence, a guide for reporters on how to do a better job covering the subject is now on the drawing boards.

The plans were announced at a Philadelphia “summit” conference last week organized by Jim MacMillan, a former photographer for the Philadelphia Daily News.

“There is room for improvement in the work we do,” said MacMillan, who launched a website Friday after noticing inconsistent media reports on shooting statistics in Philadelphia.

The site appears similar to efforts launched by journalists in other cities to provide up-to-date information on homicide figures, such as DC Witness in Washington, D.C.

The announcement of the guide came as journalists and researchers discussed the challenges faced by crime reporters in the high-pressure 24/7 news cycle.

The meeting was sponsored by several organizations, most prominently The Lenfest Institute, owner of the Philadelphia Inquirer, WHYY Radio in Philadelphia, and the Donald W. Reynolds Journalism Institute at the University of Missouri.

The shortcomings cited by speakers are not new and might become worse, considering widespread economic turmoil in the media that has hollowed out the staffs of many newsrooms.

Jennifer Midberry, a professor of journalism at Indiana University, is exploring the criticism more systematically, holding focus groups in Philadelphia of 27 residents who have been affected by gun violence.

The study has not been completed, but Midberry said citizens cited “dehumanized portrayals” of victims by the media that reported only on violent acts but rarely provide personal information about them.

When a personal characteristic of a shooter is mentioned, whites often are described as having mental health issues, but blacks are termed violent and uneducated, she said. 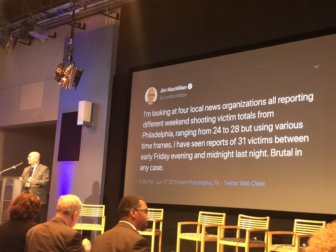 “We need to listen to the people who are most affected by gun violence,” Midberry told the conference.

The failure to follow up on coverage was cited by one focus group member as a critical media shortcoming. The resident said local media had destroyed a man’s reputation by reporting on charges that he murdered children, without reporting later that the children’s father eventually was charged.

Dorothy Johnson-Speight, whose son was murdered in Philadelphia in 2001, led a panel of journalists and other victims’ mothers who have joined her in an advocacy group called Mothers in Charge.

The mothers cited “stereotyped” coverage suggesting wrongly that most young black men are in trouble with the law.

Christopher Norris, the community engagement editor for WHYY, admitted that in many Philadelphia outlets, news reports on “where to get a good cheesesteak” get more play than in-depth pieces about the violence problem.

There are some signs of improvement. In one panel, sponsored by The Trace, a five-year-old website devoted exclusively to gun issues, several journalists described pioneering work they already have done to deepen gun violence coverage.

Jonathan Bullington co-authored stories on illegal gun markets in New Orleans when he worked for the city’s Times-Picayune.

Abene Clayton worked on a year-long series “Guns and Lies in America” for The Guardian on the decline of gun violence in the San Francisco Bay area.

But speakers admitted such efforts were not enough to overcome criticism.

Some focused on language used in many news stories that include phrases like “urban war zones” and “gang-related” crimes when writing or broadcasting about violence.

Reporter Nadege Green of WLRN public radio in Miami said some media used a “hierarchy of death” to judge stories, in which killings of young children might be featured but deaths of older teens might be ignored, as if they are to be expected.

Bullington warned about media “parachuting in and out of high-crime neighborhoods” and not taking the time to understand the problems faced by local residents.

Crime rates have declined in many big cities in recent years, but not all.

Philadelphia recorded 351 homicides last year, more than any year since 2007, and there have been 6466 shooting victims in the last four years, the summit was told.

The summit concluded with a panel discussion featuring two trauma surgeons and a former trauma nurse who have handled many shooting cases.

Dr. Jessica Beard, a member of the surgery faculty at Temple University, published a study with colleagues this year showing that more than 20 percent of the 14,000 gun violence victims treated in Philadelphia hospitals from 2005-15 were admitted within 15 minutes of one another.

That was the equivalent of 54 mass shootings in the city, though there is no mass shooting event on record in the 2000s, meaning that there was little news coverage of the violence.

On Friday, Beard talked about two incidents in Philadelphia that had a vastly different level of coverage.

In August, six police officers were shot, none fatally, in a neighborhood gun battle. The incident attracted massive media attention

Beard treated six shooting victims herself around the same period and checked on media coverage. Most of the cases got no coverage, and a few were mentioned by media in simple one-line stories that did not tell anything about the circumstances of the gunplay.

“One-line reporting on victims is harmful,” Beard asserted. “It has to stop.”

Ted Gest is president of Criminal Justice Journalists and Washington bureau chief of The Crime Report.