Ultragenyx Pharmaceutical (NASDAQ:RARE) last released its quarterly earnings results on Tuesday, November 5th. The biopharmaceutical company reported ($1.96) EPS for the quarter, missing the Thomson Reuters’ consensus estimate of ($1.71) by ($0.25). The firm had revenue of $25.80 million for the quarter, compared to analysts’ expectations of $28.88 million. Ultragenyx Pharmaceutical had a negative net margin of 470.18% and a negative return on equity of 51.40%. The firm’s quarterly revenue was up 119.4% compared to the same quarter last year. During the same period in the previous year, the firm posted ($1.74) EPS.

In other news, CEO Emil D. Kakkis bought 5,000 shares of the business’s stock in a transaction on Wednesday, September 11th. The shares were bought at an average price of $43.63 per share, with a total value of $218,150.00. Following the completion of the transaction, the chief executive officer now directly owns 472,479 shares in the company, valued at $20,614,258.77. The transaction was disclosed in a filing with the Securities & Exchange Commission, which can be accessed through this link. 7.80% of the stock is owned by insiders.

Ultragenyx Pharmaceutical, Inc is a biopharmaceutical company, which engages in the identification, acquisition, development and commercialization of novel products for the treatment of serious rare and ultra-rare genetic diseases. Its product includes Mepsevii and Crysvita. The company was founded by Emil D. 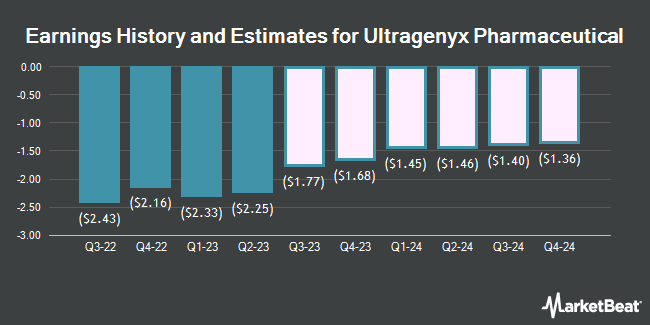