Research from 1994 to 2014 has generally found that there is a negative relationship between immigration and crime in the United States. According to those and other findings, all immigrants have a lower criminal incarceration rate and there are lower crime rates in the neighborhoods where they live. Even recent research on illegal immigration and crime has found a negative relationship.

All of those studies research the relationship between crime and immigration in recent years and decades – which is most relevant for setting public policy today. However, I recently came across historical homicide data for New York City going back to the 18th century. Although research from over a century ago generally found a negative relationship between crime and immigration too, historical homicide data present a fun opportunity to see the relationship over time.

Figure 1 shows a strong negative relationship between homicide rates per 100,000 New Yorkers and the percent of the population that is foreign-born. A simple linear regression between the two variables shows a negative coefficient of -0.32 that is significant at the 1 percent level. This is just a correlation and does not imply causation. 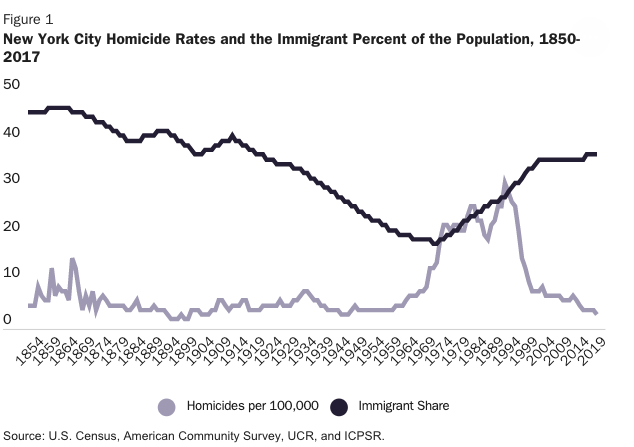 Figure 1 starts in 1850 because that’s when the U.S. Census began to count the nativity of the population. The total population of New York City and its immigrant share come from the U.S. Census and the American Community Survey. Values are interpolated for missing years. Homicide data come from the historical ICPSR database and the FBI’s Uniform Crime Reporting (UCR) statistics for more recent years. I did not include any controls.

Even the most naïve regression between homicide rates and the foreign-born share of the population in New York City, the largest immigrant hub throughout U.S. history, shows a negative correlation over time.