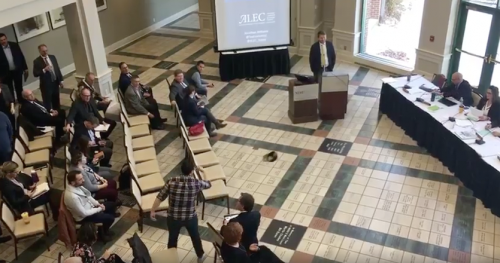 FARGO — The North Dakota Legislature Legacy Fund Earnings Committee hearings started off Tuesday night by listening to the public on a range of ideas on how to spend the state’s $6.36 billion surplus from oil and gas revenues. On Wednesday, however, the hearings turned sour after a representative from an out-of-state bill mill took the stand.

Members of the Red River Valley Democratic Socialists of America immediately disrupted the speaker, Jonathan Williams, the chief economist and vice president for the Center for State Fiscal Reform of the American Legislative Exchange Council, or ALEC, as he was preparing to present a case for reducing state income taxes, an idea that has already been turned down by state lawmakers.

“Mr. Chairman, why does this man get 50 minutes to sell an idea and last night people of the public barely got any time,” one man asked. “He is just a charity for billionaires.”

The person stood, put two one-dollar bills into his hat and threw it at the ALEC representative.

“If he needs money, here you f*cking go. Pass the hat around.”

“Carpetbagging piece of junk,” another person said from the crowd. “Go home. Go back to the swamp, Shrek.”

A woman stood up and placed a carpet bag full of Monopoly money on the speaker’s lectern.

“Your tax cuts are for billionaires,” another person said.

Fargo Police were called at 10:56 a.m. about a disturbance involving protesters inside the North Dakota State University’s Alumni Hall. Fargo Police along with NDSU Police responded, but found no disruptions, and no arrests were made, according to Fargo Police Crime Prevention and Public Information Officer Jessica Schindeldecker.

“The voters already voted tax elimination down in 2008 and these legislators know it,” Echola said. “They tried to pass it again in the 2017 session and failed again. But here we are with members of ALEC and their carpetbaggers from D.C. repeatedly trying to ram this through.”

Many ideas of how the state should spend its $6.36 billion Legacy Fund have been presented to the North Dakota Legislature’s Legacy Fund Earnings Committee this week. Citizens asked for road repairs, bridges, more school investment, affordable housing, rural town demolition, counseling services, and other requests including universal school lunches, which solicited the most interest.

“They were upset, they wanted to disrupt the ALEC speakers,” Wardner said. “It was kind of interesting as the ALEC speakers were going to talk about reducing the income tax and not many on the committee are for that.”

The state already has a low income tax and Wardner does not support the ALEC proposals, he said.

“But they [RRVDSA] discredited themselves and some of them spoke last night and they were given all the time they wanted, nobody cut them off,” Wardner said. “I’m disappointed they felt they had to do that. As far as calling us names, I’ve been a basketball coach… and now I’m a legislator, and I get called those names periodically, it’s like water off a duck’s back.”

The first speaker, Williams, was later followed by a representative from Americans for Prosperity, Russ Latino, who also spoke about reducing tax reductions.

“It is certainly one thing to protest, but when we have public hearings like that it’s best to try to get your point across to the committee,” Joshua Boschee said. “Outside of committee rooms is where protests should take place.”

ALEC reports that it is the largest membership driven organization of legislators in the nation, and yet only two percent of its revenue comes from membership dues, according to The Center for Media and Democracy. The rest of the funding – as the organization works with a deficit of approximately $1 million every year – is donated by captains of industry, Koch Companies, UPS, State Farm Insurance, the tobacco industry, the oil industry, the coal industry, big pharma, and big food-developers.