Parsing our title, is gripping in completing a fourth consecutive up week. Moreover, per the above Gold Scoreboard, recent weekly closes [green rectangle] continue to track those of a year ago, indeed so much so that were such pattern to be maintained, we’d find Gold at its All-Time High (2089) in just three weeks’ time. Not so much a prediction as an observation in our maintaining our 2401 forecast high for this year. For should 2089 trade, 2401 could come (to put it articulately) “real fast.” After all, Gold by the Scoreboard ought today already be up at 3864.

As well says our title, the economy is tipping in playing right into what we’ve been stating for months: that the recovery out of COVID “has already happened.”

“But hang on, mmb, because President Biden is just now heralding the economic recovery…”

Yes, so we read, Squire. And one cannot fault the Administration for providing free money, rainbows, unicorns and solar-powered flying toasters. “Breakfast in bed, luv?” Let’s straightaway go to the Economic Barometer which appears poised to tip into trouble. To the technician, at right is about as ugly a “drooping shoulder” as you’ll find, with a light data set due in the new week:

Oh to be sure, not all of last week’s incoming metrics were poor: June’s actually grew (barely) after having shrunk in May. As well, July’s nearly tripled over that of June to a record high 43.0: “LET’S go YANKees,” BUT: the July readings for both the and slipped; growth in June’s was nearly halved; and May’s bloated by +0.5%, their three-year average monthly change being +0.1%, (i.e. stuff wasn’t movin’ in May …).

More concerning, June’s annualized wholesale inflation came in at a 12.0% pace, that for retail inflation at 10.8%, along with increases (ex-Oil) for StateSide at 8.4%, and 13.2%. SO to today’s already familiar equation:

■ Up with the pricing + down with the economy = Stagflation

Indeed, you regular readers are already well tuned-in to that, even as (per Dow Jones Newswires): “…Higher Is Here to Stay for Years … according to economists who expect the robust post-pandemic economic recovery to fuel brisk price increases…” Our only edits thereto would be replacing “Inflation” with “Stagflation” and “robust” with “feeble”.

Meanwhile, Q2 Earnings Season is underway. For the , just 23 companies have reported, almost all expectedly “beating estimates;” but not all are beating the like period of COVID-entrenched Q2 from a year ago, (five of the 23 coming in worse). Still, no worries, ’cause ’tis early, right? You betcha…

Further, the Index’s price/earnings ratio thus far isn’t materially improving, our “live” reading at this writing 55.3x. Indeed as an analogy in paraphrasing from one of our pet films “Boeing (NYSE:) Boeing” [Paramount, ’65]: “This is what has happened since the market mania came: value has been annihilated.” Again we query: “Has the S&P crashed yet?”

As for the FedSpeak from this past week, FedChair Powell and Richmond FedPrez Barkin seem similarly aligned toward not immediately tapering asset purchases, whereas St. Louis FedPrez Bullard says now’s the time for such paper taper. Clearly ’tis evident throughout our recent missives that the Federal Reserve’s family is displaying directive disarray. Then there are the more private sector investment specialists, to wit one Jeff Gundlach, who without mincing words on Thursday broadly sees the Dollar as “doomed”. No kidding? Again we query: “Got Gold?”

Gold positives-a-plenty, price’s weekly parabolic trend nonetheless remains Short, albeit we remain resolved that it be short-lived. To wit: fundamentally, seasonally, debasededly or given any and all of the 3Ds (Debasement / Debt / Derivatives), for Gold we continue to like what we see. No, we don’t expect Gold to increase every week as it has done for the past four; but year-over-year, Gold has posted one-week gains of better than 3%—that’s more than 50 points given current levels—five times. (Recall, too, in the fall of 2007, Gold gained ground for 12 consecutive weeks: that from the “When it Goes, It GOES! Dept.”). All noted, Gold settled the week yesterday (Friday) at 1813, from which we trust ’twill show more grip and go: 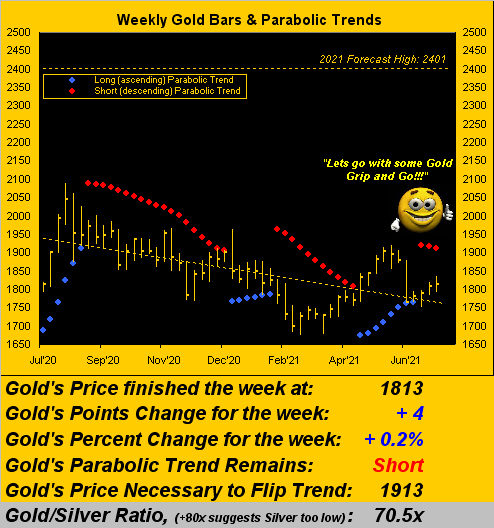 Now to our two-panel graphic of the precious metals’ daily price bars from three months ago-to-date with Gold on the left and on the right. The baby blue dots are representative of trend consistency, which for Silver are looking to run out of puff unless she can quickly get off her duff: 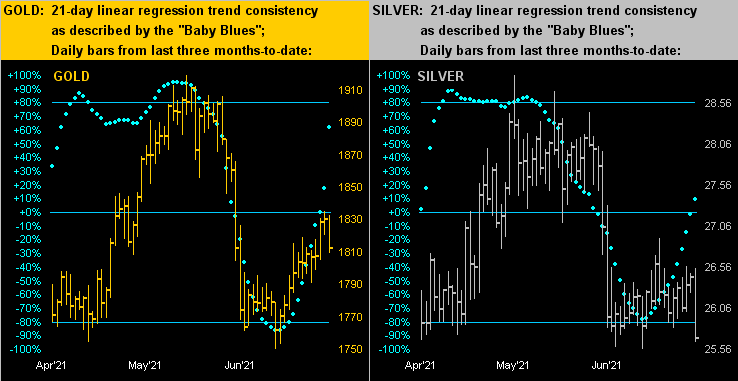 Yes, as much as both Gold and Silver are money, ole Sister Silver at times gets caught up in wearing her industrial metal jacket, complimented here by (below left) looking very similar, and economically worse, the price of (below right) finally breaking its incessant rise since April, the linear regression trend now in rotation from positive to negative as the “Baby Blues” careen down toward crossing below their 0% axis; (we’re looking for Oil’s 67-62 structural support area to hold): 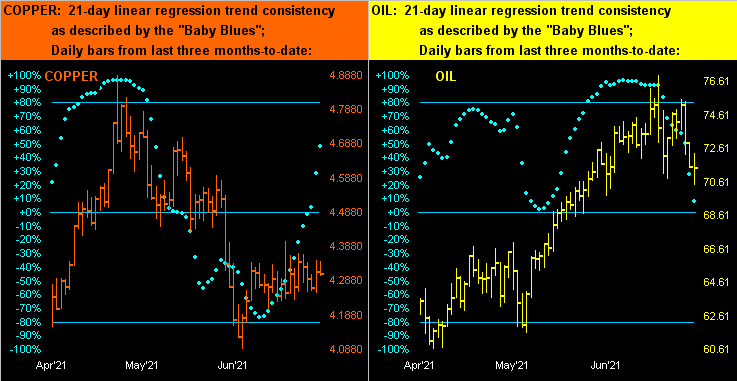 Specific to the precious metals’ pricing, here we’ve their 10-day Market Profiles for Gold (left) and for Silver (right). Gold looks to support at 1806 and Silver to resistance in the lower 26s: 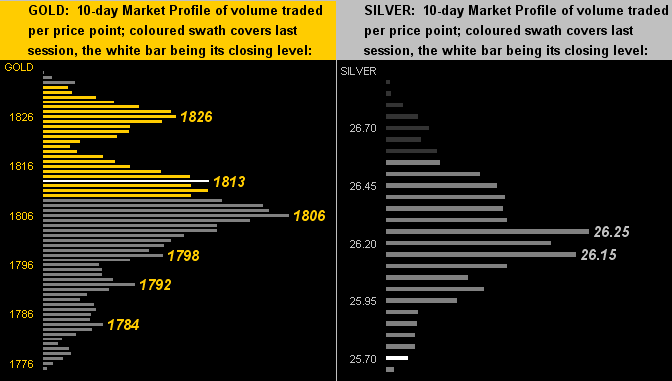 So in stacking it up for the yellow metal, here is…

In closing, in we cited Wells Fargo (“Since 1852!”) withdrawing from its personal line of credit business. Now a week on, we nevertheless read (courtesy of Bloomy) that:

Well, ain’t that just swell, Mel? We mentioned earlier the FedFolks being in disarray; so ‘twould also appear are the banks.

Here’s the bottom line: Does it all seem reminiscent of 2008/2009? Yes. How about the aforementioned lack of earnings for the S&P 500: kinda like 2001/2002? Yes. (Did we already query “Has the S&P crashed yet?” Yes.) Ought we thus be converting worthless cash to Gold as ’tis gripping with the economy tipping? YES!!!