KOCHI: Buying a denim jacket is almost like a rite of passage to the ‘cool club’ in college. Everyone wants to sport their devil-may-care attitude that comes so easily with being young and reckless, using the cool blue denim sleeve. But once adulting starts, the former prized possessions are thrown into a dim corner of the cupboard never to see the light of day again. However, things might just be looking up for the abandoned garment. Tribe, a custom denim upcycling brand started by Wayanad-native Akhil Jacob breathes new life into old denim jackets while also preserving the environment—an evolved rebel with a cause. 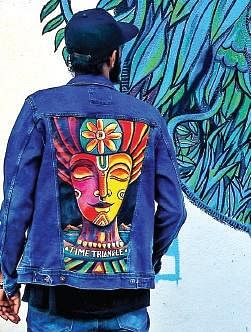 Having worked as photographer and art director for advertising agencies for over five years, Akhil decided to return to his first love, painting. His first art exhibition was held in Bengaluru last year. “I decided art was going to be my way of life, but I wanted to create a product that would add value to people. I didn’t just want to paint and sell my works. So during one of my travels, I learnt that India produces a lot of textile waste as a lot of international fast-fashion brands have their manufacturing units here. I wanted to do something about this,” says Akhil. One of his visits to Auroville proved fortuitous when he met a group of people practicing sustainable living and creating green products. This incited him to found Tribe in December last year.

Akhil’s research on fast-fashion made him realise the alarming rate at which Earth’s resources were being used to produce clothes that were being discarded in weeks. His answer to the problem was to merge his penchant for art with his resolve to save the planet,  one garment at a time in a blessed synthesis he likes to call ‘artcycling’. Tribe’s ethos lies in revamping old denim jackets by garnishing them with vivid designs. “Denim jackets can last you a lifetime. I wanted to convert them into wearable art, something that can be cherished and takes the pride of place in one’s wardrobe without being forgotten. My clients either give me their old jackets or I procure vintage ones from various places once every year,” adds the 29-year-old.

The process of making a jacket anew is both exhaustive and exclusive, one project takes anywhere between 15 to 20 days. “I sit with my customers, listen to their story and get a sense of what they want to convey through the jacket. Only then do I paint their vision. Some choose from the designs I show them. The process is long because I use a special kind of paint and glue which I developed for this. I initially used fabric paint but realised it was coming off. The first coat is white which makes all subsequent colours pop. Each layer has to be dried in the sun before I can add a new colour,” says Akhil.

A majority of Akhil’s 20 ‘artcycled’ jackets so far depict an underlying tribal theme. Anthropomorphic faces of tribesmen fuse into the natural flora, revealing the intention behind the name of his brand. “Being from Wayanad where 70 per cent of the population is tribal, I have closely observed their way of life which is so integrated with nature. I draw my inspiration from them,” adds Akhil.

Ardent to continue exploring tribal heritage and wanting to stay true to his brand, Akhil wants to work with other tribal communities in south India. He soon intends to integrate the colourful patch and mirror work embroidery made by the nomadic Lambani tribes of Karnataka into his designs. “I am already working on the prototype. One other crucial initiative of the brand is to support disadvantage tribal communities in any way I can,” says Akhil.