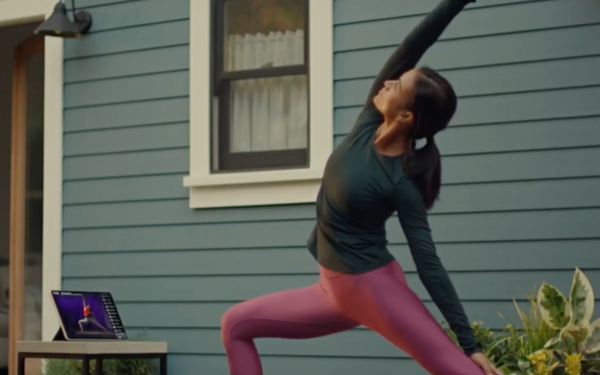 OK, Peloton’s much-maligned Christmas ad was a
terrible idea. But a new report from Wedbush Securities predicts the New York-based company is poised to leave the competition in the $5 trillion fitness market in the dust.

As more people
look to “work in” than “work out,” Wedbush expects Peloton to be “one of a small number of fitness companies likely to be an enduring force going forward.”

Wedbush, which is just beginning its coverage of the company, says its forecast that Peloton will outperform the market is based on analysis of current users, prospects, and its business model.

“We do not believe that Peloton will prove to be a fad,” writes James Hardiman, the Wedbush analyst who covers the fitness category. “Peloton has a first-mover advantage in an
emerging and compelling subset of the fitness market, providing consumers what they want, where and when they want it,” he says. Wedbush believes Peloton has the best odds of “becoming
synonymous with at-home fitness, an undeniable trend with a considerable runway.”

Certainly, the products are pricey. But with the market growing about three times faster than inflation,
fueled by aging boomers, Peloton stacks up favorably when compared to the cost of health-club memberships.

“Worsening time poverty and evolving technology allow fitness-seeking consumers
to work out how they want, where they want, and when they want,” Hardiman says.

Peloton’s Wall Street performance has been volatile since its initial public offering last
fall, the social-media hullaballoo around its “tone-deaf ad,” and the many interactive competitors unveiled at the recent Consumer Electronics Show.

Wedbush believes the
company’s subscription business has the potential to reach about 4 million subscribers, including 3 million in the U.S., or about 2% of U.S. households. (Currently, there are about 600,000
subscribers.) In addition to its existing bikes, which cost about $2,000, and treadmills, at about $4,000, the company also offers subscriptions to classes that include yoga, weight training and
running. And there are reports it is mulling rowing machines, as well as more affordable treadmills.

In Wedbush’s research, consumers were highly interested in a theoretical rower and an
elliptical, and Peloton bike owners and non-owners both expressed “significantly more” interest in a cheaper treadmill.

Wedbush defined Peloton’s potential market as the 31
million U.S. households with more than $50,000 in annual income, who are interested in fitness products and already familiar with Peloton. Of those, Wedbush projects that 15 million are interested in
the brand.

Ultimately, the company’s success can be measured by the stability of its subscription business, which Wedbush says should settle at about 22% of turnover annually. (Its
current churn rate of 1% is not sustainable, he says.)

Global prevalence of hepatitis C virus in children in 2018: a modelling study