TOKYO/HONG KONG/SINGAPORE — Fake meat was a hot commodity in the U.S. in 2019. In 2020, all the ingredients are in place for the imitations to show up on more Asian tables, too.

Stateside, in 2019 brought the release of Impossible Foods’ plant-based Impossible Whoppers at Burger King, as well as the listing of rival Beyond Meat on the Nasdaq stock market. With less fanfare, Asian fast-food chains and food processing companies have been cooking up their own strategies to tap an Asia-Pacific meat substitute market that Euromonitor International expects will hit $15.8 billion in 2020.

Industry players smell opportunity for a few reasons: a perception that consumers are growing more health conscious, heightened awareness of greenhouse emissions from cattle farms and the meat industry, and the devastating outbreak of African swine fever in China.

Rising “consumer awareness” of the United Nations’ Sustainable Development Goals — which include “responsible consumption and production” — is fueling the expansion of the market, observed Seiichi Kizuki, a research director at the Mitsubishi Research Institute. He added that a “rise in health consciousness [coupled] with the region’s economic growth is another motivation” for Asian consumers to opt for meat substitutes.

“This consumer trend is not to be missed,” Kizuki said.

In Japan, major meat processor Itoham Foods is preparing to introduce Japanese-style Hamburg steak and fried chicken derived from soybeans in February. The subsidiary of Itoham Yonekyu Holdings is aiming for so-called flexitarians, who occasionally eat meat but generally avoid it.

Edible oils company Fuji Oil Holdings opened a restaurant in Osaka in September that only serves plant-based dishes, such as lasagna. Its mock meat is made with defatted soy bean. “It is attracting Asian tourists visiting Osaka, including strict Buddhists who cannot eat most Western foods,” a spokeswoman said. Fuji Oil Holdings group opened a restaurant in Osaka that sells only plant-based dishes, including a meat substitute made with soybean protein. (Photo courtesy of Fuji Oil Holdings)

Fuji Oil has high expectations for demand for soy protein as a substitute for meat. The Osaka-based company has invested about 2.4 billion yen ($22 million) to start production in Chiba Prefecture, near Tokyo, in July 2020. This will double its production capacity from the current 9,000 tons a year.

Mock meat is making its way into Asian fast-food joints as well.

Mos Burger, run by Japan’s Mos Food Services, started selling Mos Impossible Burger in Singapore in December. The plant-based patties were developed by Impossible Foods. Mos has been gauging the customer response but was hoping to sell 20,000 burgers by the end of 2019 and planned to add them to its regular menu soon.

In Taiwan, meanwhile, the Japanese chain offers an alternative burger made with Beyond Meat. The group is thinking about expanding its mock meat lineup to other countries. 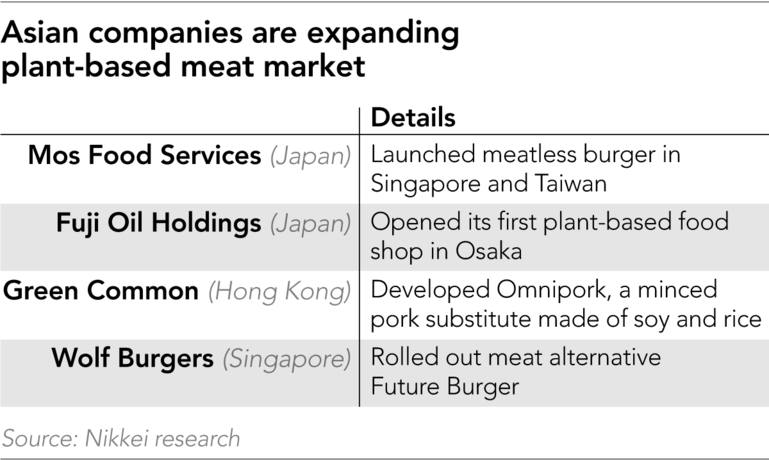 The trend is not confined to big players.

Wolf Burgers uses Beyond Meat patties. They are not exactly cheap — a Future Burger goes for SG$16.90 while a standard Original Wolf Burger costs SG$9.90 — which speaks to one of the challenges for mock meat. Prices tend to be higher than those of actual meat, as the limited market makes it hard to achieve economies of scale.

Nevertheless, Wolf Burgers thinks consumers are moving toward healthier diets as society becomes more affluent. It also wants to cater to the environmentally minded. The United Nations Food and Agriculture Organization says livestock account for as much as 14.5% of global greenhouse gas emissions, making excessive meat consumption a climate issue as well as a health one.

Though American ventures sparked the fake burger trend that is beginning to sweep the world, Asia has a long history of substituting meat in Buddhist cuisine. And one of Asia’s most famous tycoons — Li Ka-shing, Hong Kong’s richest man — was an early investor in the modern meatless movement.

As a devout Buddhist and meatless meat lover himself, Li invested in Impossible Foods through his private equity unit, Horizons Ventures, back in 2014. That was two years before the company released its first product, the Impossible Burger.

Li’s bet is looking smart. In the past five years, the valuation of the California-based Impossible Foods almost tripled from $700 million to $2 billion, according to data provider PitchBook.

The company’s mock meat was introduced in Hong Kong in 2018 and is now available in more than 250 restaurants in the city.

Some businesses that handle imitation meat in Hong Kong are looking to the far bigger mainland China market, which consumes 28% of the world’s supply of real meat. This comes as China continues to battle the outbreak of swine fever that has forced it to cull around 1 million pigs, leaving a large void.

Green Common has also developed Omnipork, a minced pork substitute made of soy and rice, through subsidiary Right Treat. In the coming months, 180 hotels and restaurants in Beijing and Shanghai will begin serving the mock pork.

It appears to be a good time to expand in the mock meat market. Euromonitor’s research suggests demand for meat substitutes — from vegetarian burgers and sausages to meatless soy-based prepared meals, including frozen, chilled and shelf-stable products — will grow steadily over the next five years. But there may be some hiccups along the way. In some parts of the region, such as China, eating meat is traditionally seen as a symbol of fortune. Consumers may be reluctant to give up on the real thing.

Toshifumi Kokubun, a partner at EY Advisory & Consulting in Japan, voiced skepticism for a different reason.

“With plant-based substitutes that taste like meat, the challenge is that safety standards for these foods — even if they are derived from plants — have not yet been established,” Kokubun warned, noting possible gene recombination and unforeseen effects.

As companies rush to throw fake meat on the grill, Mitsubishi Research Institute’s Kizuki agreed that safety is a crucial part of the recipe. “As a prerequisite, taste, price, quality and safety should all be at acceptable levels,” he said, “as only then will consumers be willing to pay for meat substitutes.”