Scottsville has a long history as a trading center. But this year the town did a deal like no other, when Town Administrator Matt Lawless was traded for Vietnamese Agricultural Consultant, Thai Van Nguyen. (Mayor Nancy Gill remains mum on the matter of future draft choices.) Recently, Lawless invited the Scottsville Monthly into his office to explain the ins and outs of it all.

In October of 2018, the International City/County Management Association (ICMA) held its annual conference in Baltimore, Maryland. The convenience of this location attracted Lawless, who attended the four-day conference to hobnob with his peers and improve his administrative chops. One of the opportunities he brought home was a program which would provide exchange arrangements between American city managers and members of the Young South East Asia Leadership Initiative (YSEALI). The town’s application was accepted, and Scottsville became the smallest jurisdiction in the 2019 class, joining Dallas, Minneapolis, and Oak Ridge, Tennessee among other cities and towns.

In May of this year, Thai Van Nguyen joined the town staff for four weeks of immersive administrative experience, James River Valley style. “He worked on our Small Area Plan.” says Lawless. “He was especially helpful directing our focus groups.” 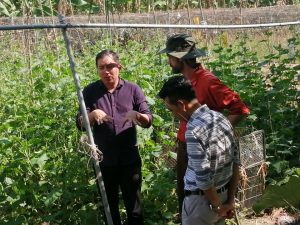 Mr. Thai hails from the Mekong Delta region in Vietnam. According to Lawless, “He was quite taken with the area. He’s an avid cyclist and photographer, so we went running and cycling together. Everywhere he went he would take pictures.”

Lawless and Thai day tripped down to Richmond, and also over to Amherst to attend a Monocan Pow-Wow. Day to day, Thai worked on town business, strolled the streets, popped into the shops, and supped and sipped in the local cafes. Nights and weekends were for backyard and front porch ssitting; get-togethers including a Game of Thrones themed party, the farmers market, local church services and, always, the river.

“Everything here is completely different from his home.” says Lawless. “The hills, the biodiversity…the river is narrow.” On the other hand, the Mekong Delta is an alluvial plain of some 15,000 square miles, where tropical mudflats and rice paddies sprawl among numberless bayous, tidal creeks, and the river’s nine major channels. The word Mekong derives from an ancient phrase meaning Nine Dragons.

Lawless went to Vietnam for two weeks over September and October. He was just as struck by the Mekong vistas there as Thai was by our James River scenery here. 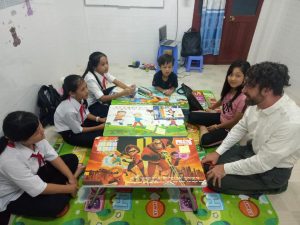 “I never figured out which was the main channel.” says Lawless of the Mekong River. “I would look across a great river, and just past the far bank was an even greater river. The creeks were running the wrong way. It took me a while to figure out what was going on.” Around here residents know how creeks are supposed to work. The water runs down the hill, and into the river. What looked like creeks to Lawless are really just backwaters of the Mekong River; the river water pushing out into its flat, tidal marsh surroundings.

Lawless accompanied Thai on his daily rounds, meeting with farmers, village councils, governmental officials, and women’s groups. Thai pointed out the importance of his meetings with this last category. Though he is an agricultural specialist – men’s business – he must also attend meetings about women’s health, child rearing, home economics, and the like. If he doesn’t, he’ll miss at least half of the local Ag story. As Lawless explains, “In mixed company, Vietnamese women will defer to the men, who then do all of the talking.”

One of the biggest changes the Vietnamese government has implemented in the Mekong Delta is the rationalization of land use. The old ways had created a hodgepodge of individual or village paddies which had come about through complex webs of social, cultural, and agricultural traditions. Some of those traditions are, to one degree or another, still around. To explain the melding of tradition with central planning, Lawless points to the Communist government’s approach to religion. “In theory, there is no religion in Vietnam. In practice it is more of a soft atheism. Over the years, government officials have seen that it is easier to implement a program if they can get the local Buddhist monks on board.” 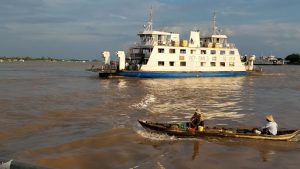 A big change is the replacement of traditional agricultural practices with modern, agri-business methods. “There is no biodiversity.” says Lawless. “None. The use of pesticides means there are no fish, no birds, no small animals; nothing but rice.” The new strains of rice, and accelerated growing methods produce higher yields which, of course, command lower prices. Traditionalists have argued that the older methods work better overall.

“There has been some push back.” says Lawless. “There are some organic farms here and there.” Farmers used to raise fish in their flooded paddies and have harvests of both fish and rice. And the rich river silt, in which the rice grew was fertilized by the fish droppings. According to Lawless, “Thai is helping farmers find markets, and better prices, for traditionally raised crops.”

Another major change came with the more linear approach to the way paddies should be laid out. In a wetland world, the tops of the rice paddy dykes are where the most reliably dry land is found. Since the dawn of rice cultivation, the dykes have served as pathways among the paddies. Optimum usage of these paths is not found in a garden-maze pattern, zig-zagging among the flooded rectangles of rice, but in more of an urban grid pattern of dykes. Thus, a short stretch between small paddies can still serves as a farm lane. But by taking a Delta wide approach to the lay-out, the dykes can also serve as both inter and intra-village roads, feeder roads, and main arteries. Not surprisingly, transportation has improved using the newer methods.

Says Lawless, “Most days, Thai commutes about ten miles to work by biking along one of these dyke roads.”

So, was anything gained by this administrative, cross-cultural pollination? Lawless is enthusiastically affirmative. “My strength is in surveys, not focus groups. They don’t do surveys in Vietnam, but use a focus group approach instead.”

Which makes sense, given the cultural differences between the U.S. and Vietnam. Americans are comfortable with the rat-a tat-tat of the love it or hate it list of questions, and its instantaneous statistical result. The Vietnamese are not. It is said that Americans reinvent themsealves every day, while they revere tradition; snap, crackle, pop vs. a languid discovery of body language nuances.

“Not only did he run the focus groups [on the Small Area Plan], but he created a manual of procedures for us, covering group organization and direction. We will be using it as we move forward.”

Lawless says he was able to offer some administrative guidance to his hosts, as well. “I stressed the importance of diversity, when planning.” Vietnam, like most places, has ethnic minorities, and indigenous tribal groups within its population. And, as in most places, those people have not often fared well in the decision-making process.

“No corruption.” was another point Lawless stressed. A lofty goal, certainly; but America’s offended demand for accountability is preferable to the Vietnamese’s casual acceptance of the practice. “I really stressed local autonomy.” says Lawless.

On the whole, this trade looks like a win-win. The Ag consultant from the small market state taught us – the digitally driven denizens of the global colossus – how to talk to one another.

Going back the other way, our own buried-in-paperwork bureaucrat shared with a centrally planned, but traditions bound group the high-concept secrets of our own unbound culture:

each of us counts; rule of law; and, less-is-more governance.

Hats off to Mr. Thai, and Mr. Lawless!