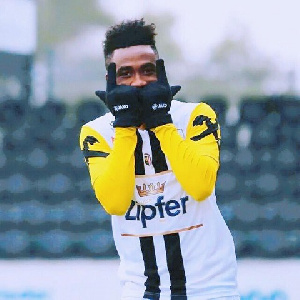 Samuel Tetteh was on target for LASK Linz

Footballmadeinghana.com brings you up to speed with a comprehensive coverage of the performance of Ghanaian players abroad.

Iddrisu Baba featured for Mallorca in their 2-1 defeat to Levante win over Villareal. Baba Rahman and Lumor Agbenyenu missed the game due to injury

In the Championship, Andre Ayew lasted the entire duration for Swansea City in their defeat to Millwall

In the League One, Kwesi Appiah was a second half substitute for AFC Wimbledon in their 1-0 win over Gillingham

n the Serie A, Alfred Duncan featured for Sassuolo in their 2-1 defeat to Lazio

Kevin-Prince Boateng warmed the bench for Fiorentina against Verona

In the Serie B, Bright Addae missed Juve Stabia’s match against Salernitana.

Moses Odjer was unused substitute in the game for Salernitana

Bright Gyamfi impressed for Benevento in their 2-0 win over Crotone. Abdallah Basit was an unused substitute for the victors

In the Ligue 1, John Boye put up a good performance for FC Metz in their draw with Reims

In the Ligue 2, Abdul Samed Salis made a short cameo for Clermont against Ajaccio

Kassim Nuhu featured for Dusseldorf in their 4-0 thrashing at the hands of Bayern Munich 4-0. Opoku Ampomah and Bernard Tekpetey warmed the bench for the losers

Isaac Cofie was unused substitute in the game for Sivasspor

Majeed Ashimeru featured for Salzburg in their 2-2 draw against St. Polten

Eric Ocansey glittered for Kortrijk as they shared the spoils with Anderlecht.

Nana Asare was unused substitute for Gent in their game against Antwerp.

Samuel Asamoah featured for St.Truiden in their defeat to Charleroi

In the Proximus League, Kamal Sowah starred for Leuven in their 2-1 win over Westerlo

Obeng Regan cameoed for Istra 1961 in their defeat to Osijek

Mohammed Kudus was on target for Nordsjaelland in their 3-0 win over Randers. Ibrahim Sadiq, Abdul Mumin, Christopher Antwi played their part in the victory